Raf, October 11, 2021
Somehow we’d always end up back at the field beyond the graveyard on the south side of town. We’d ride our bikes through the city, past buildings that were always covered in scaffolding, over roads that were always under construction, patched and pot-holed. Weaving in and out of each other, we choreographed our own chaos coalition.

Once there we’d abandon our bikes and lay down on the ground, pressing our bodies against the earth, grafting skin onto grass and dirt. Hours would pass. The sun inched its way down into the west. Both the past and future were concealed; all that was visible was the fuzzy, nondescript present. We were still and indifferent like fossils waiting for excavation. 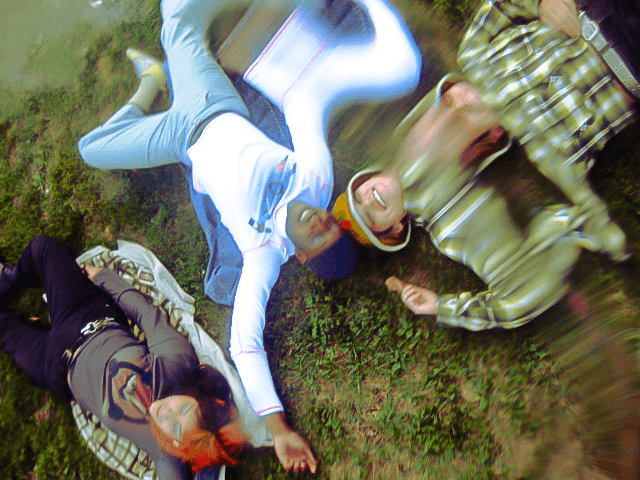 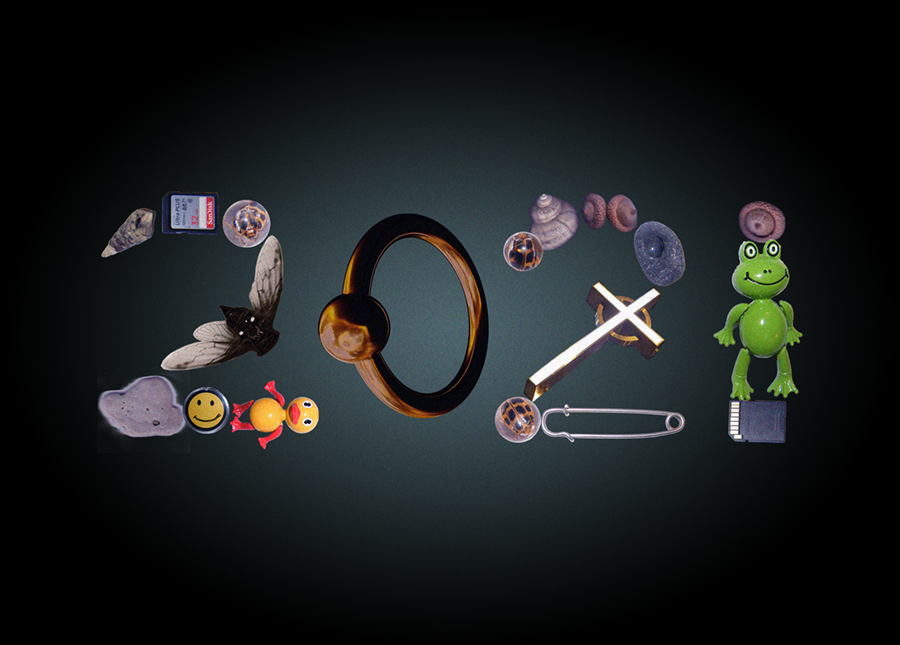 Gen, August 7, 2021
My mind wanders out of the bedroom and into the library in Old Downtown. I think back to middle school when I first started going there on my own, my early days of identity formation. I remember hanging out in the Young Adult section and thinking the classification system was all wrong. The sharp delineation between fiction and nonfiction was problematic to me. Some of the nonfiction books didn’t have a clue of what life, my life, was like, while the experience of reading some fiction was like looking into a mirror. When I found out there was an LGBTQ section on the third floor during freshman year of high school, it took me almost six months before I summoned the courage to go up and see what it had to offer. I hated that all these books were grouped together. First, because it outed me as I was still trying to understand my gender and sexuality. Second, when I was older, because I found that category to be totally inapt. What did a book on sex positions and a book on commune life have to do with each other except that they had “lesbian” in the title? It was probably supposed to make things easier for us queers but it felt more like a ghetto. I want to queer the entire library. Turn every spine inward so that every book refuses immediate legibility and consumption. Make everyone cruise for knowledge. Blur fact and fiction, smut and critical theory, into our all-encompassing existence.

Across the room, the computer screen on my desk flickers on. A video starts playing. It’s a 360-degree view of someone watching the sunset on the coast of the lake. Their legs stick out of the bottom of the frame stretched over rocks, waves licking the bottom of their feet. It’s my ex, the hacker. My phone lights up with a message from Trouble: You should be watching the sun go down with me. ♫ 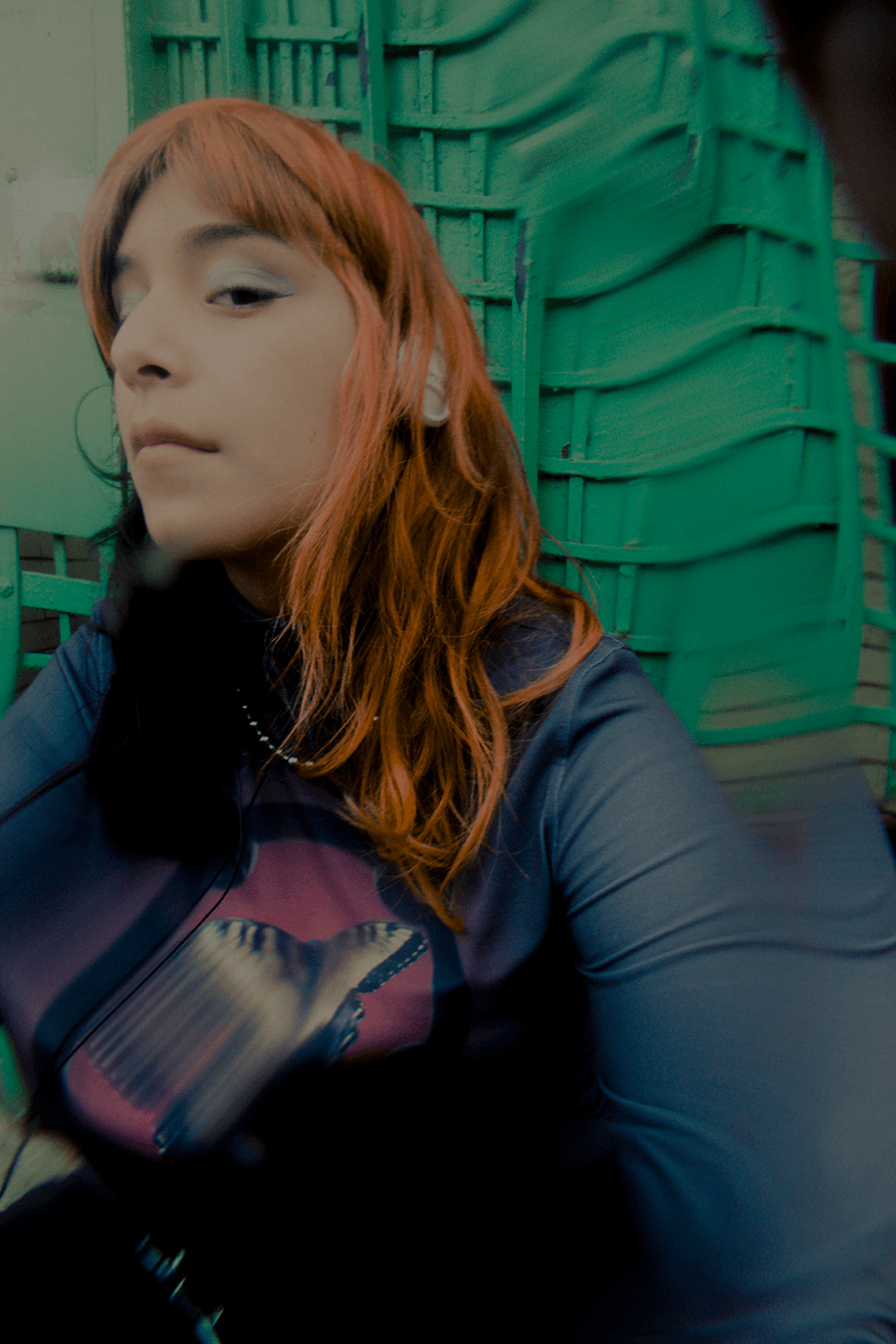 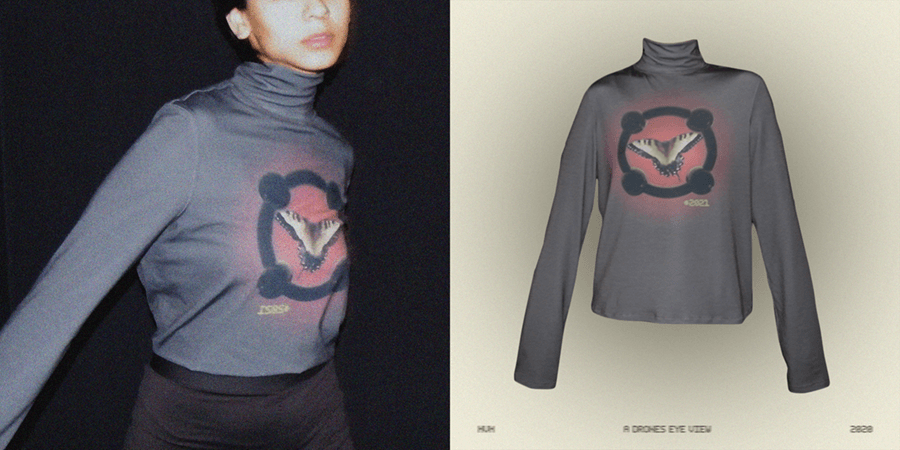 Sid, August 27, 2021
Dozens of cars crowd a small lot with three times as many people walking around, stopping to gawk and ooh and ahh. A few steps away: one car is low to the ground and looks like it’s encased in metallic shrink wrap; its tires turn from side to side underneath. Another has a large boxy frame and is covered in alternating patches of dark neoprene and black astroturf with long blades that look like fur. Next to it a tangerine army truck cannibalizes a putty-colored sportscar, their frames only separated by a thin white seam. Almost all of the cars in view have smartglass technology and their windows and windshields light up with LED messages, car stats, and various images of decadence. Thumping drum tracks and dreamy synths bloom from one car’s sound system and then flower into another, linked by some hive music mind.

I feel Ulises leaning into my shoulder. When I look his way, I see his arm extended with his phone facing us. He throws his fingers up in a peace sign and a camera shutter sounds. I grow red when I realize he’s taken a photo of us.

He pulls the phone close to his chest and I watch him fiddle with effects, brightening the photo and then darkening it, moving a slider to saturate it, adding a radial blur that frames our faces in focus. He mutters to himself as he taps at the screen, “At... Big Bug... with... Sid... hashtag... Whips... and Choppers...” His phone chimes as he posts it. He smiles at me. 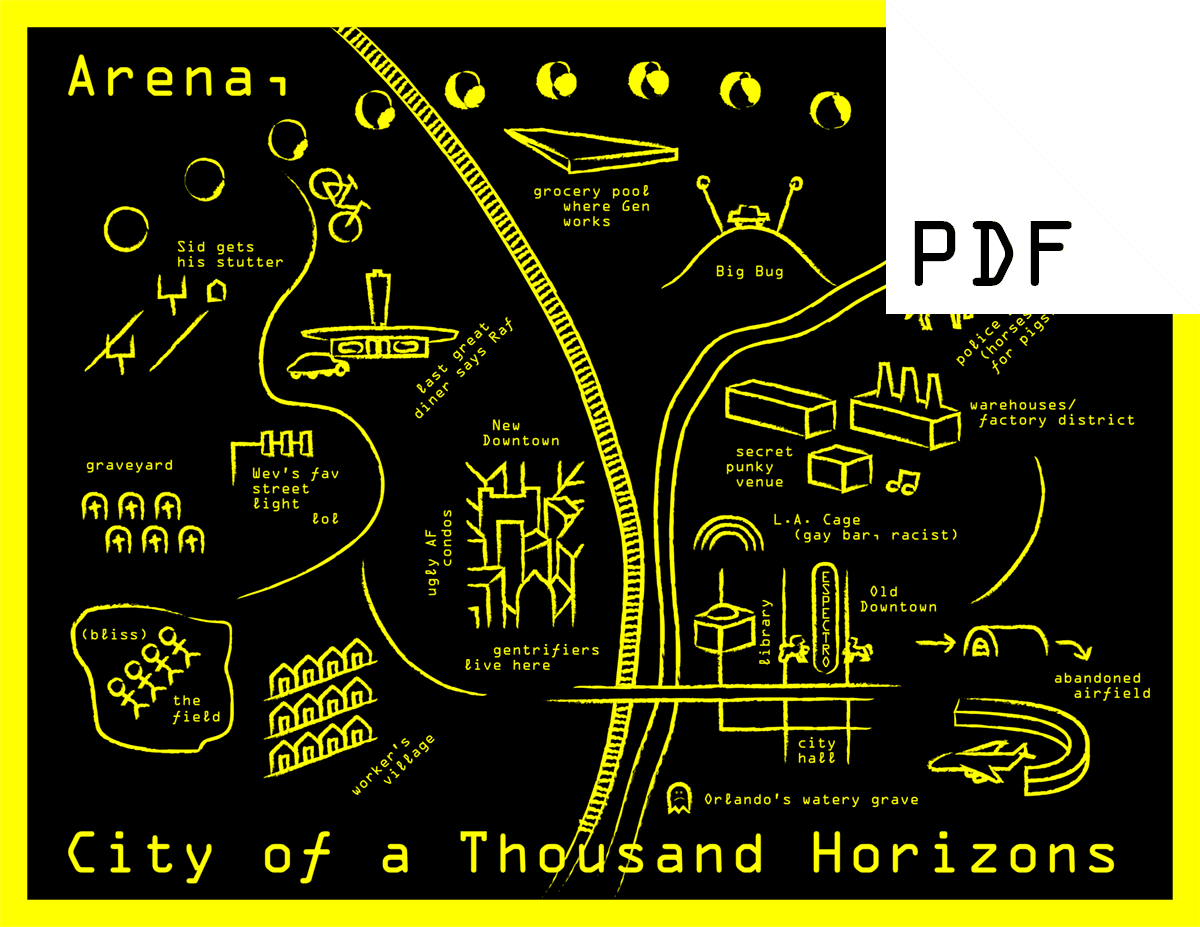 Sid, January 5, 2021
Tio holds the modem in his hand and looks it over. “We were all so mischievous in those days. Back then it was total anarchy, anti-hierarchical mayhem, sheer bliss. This is before Faceblurb and all the other totalitarian corporations that rule the net today. Everything was totally decentralized. And it stayed that way, more or less, even through the 90s as companies started wising up and realizing that they could profit off of this ballooning populace of users. Being connected in this way felt like a way out, a way to escape the cycle of control. It really felt like the internet would save us, the great liberator, or that we might finally have the tools to save ourselves...” He shakes his head again, like he ’s remembering an old joke. “Boy were we wrong, HA!”

“Yeah, f-fuck Faceblurb.” I squirm a little. It’s still a sore spot for me, the reason I stopped using social media almost a decade ago. It’s a wound that won’t heal, something I am still trying to forget. Feels stupid that I can’t move on. 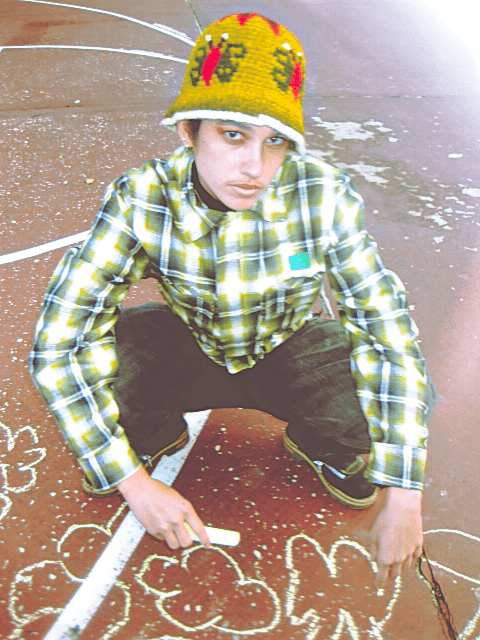 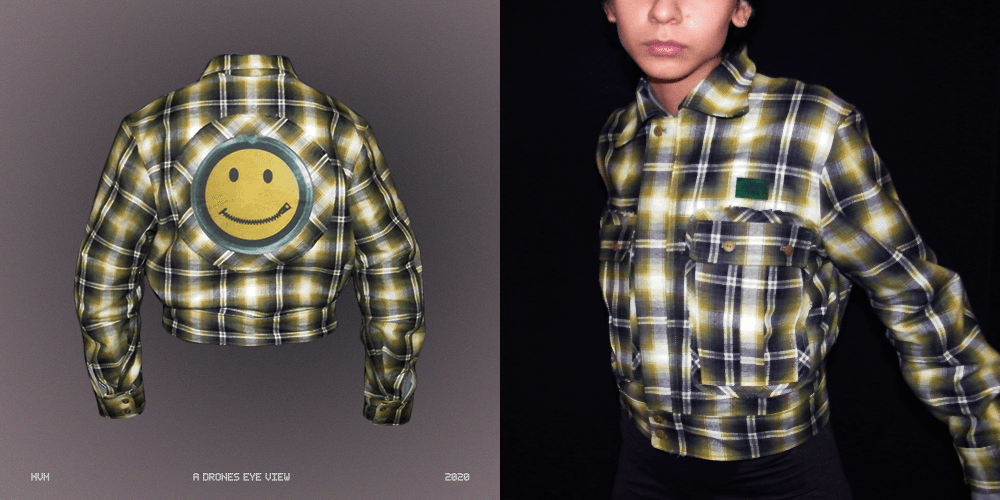 Wev, June 20, 2021
At one point I look out to a sea of windows and see my reflection. But I am not myself. I don’t see my body, at least not my own flesh and bones. I am fifteen feet long, lustrous and lacquered. No arms, just wheels. Dark windows take the place of eyes. I zip at twenty five miles an hour above the speed limit. I am a vessel. I am a technology. I am an extension of the human body, and I am a human body.

A red traffic light shakes me from my delusion. It’s my favorite traffic light because it is the longest light in town. I shift the car into park.

“Turn the music up!!” I crawl over the groaning others and crouch into the trunk. I lift my skirt up, pull my briefs down, and plaster my naked ass cheeks against the back window. I look back at the car behind us and point down to the bumper of this month’s collabo-car where I’ve added a sticker with a red “@” symbol directly to the left of the license plate so that it reads @UWC-5690; a different car every month means a sneaky ever-changing payment handle. I am dancing and cackling maniacally as I yell out of the open back passenger window, “Pay me bitch!!” I continue to shake and slap my tattooed upper thigh for good measure. The car behind us honks and the driver whistles a catcall. The light turns green and I slither back up to the driver’s seat. Gen is shaking their head. My briefs are still at my ankles as I shift back into drive.

A mock cash register bell chimes from my phone. I look at the notification. “Oh shit yeah! I just got three dollars!” I floor it. “Let’s get some gas motherfuckers!!” I’m still on a high as we pass a police car traveling in the opposite direction with its siren wailing. I sing along, “Do re mi fa so la ti dooooo!” 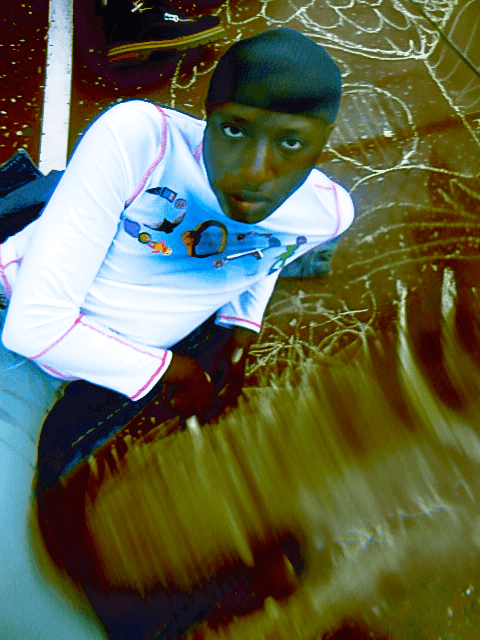 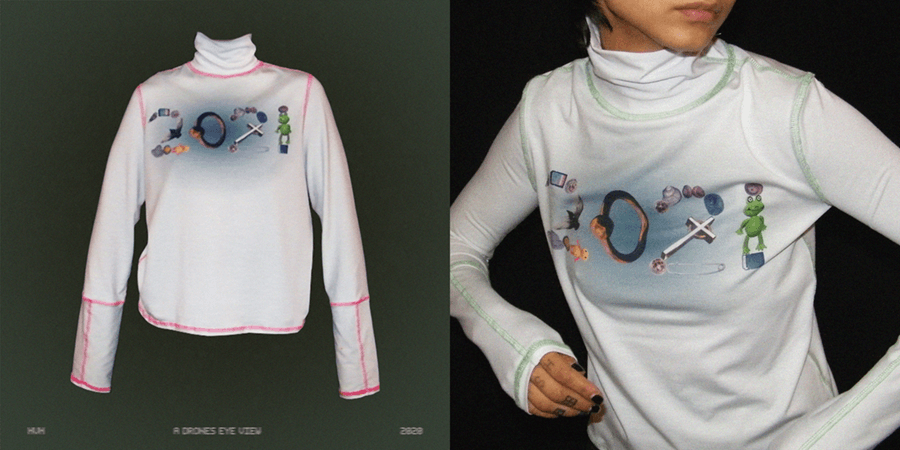 Raf, October 12, 2021
I decided to leave. I was clearly so fucking wrecked that I was hallucinating. I pushed my way back through bodies and followed the stairs back down towards the door and stumbled out of the club. It was chilly. I pulled the jacket from my waist and stuffed my arms through the sleeves. I could see my breath. I decided to walk home anyway.

The streets were mostly deserted except for the occasional drunken couple falling out of the front door of a bar and into a car they had just called. I passed an empty bus shelter with an illuminated video ad that followed my movement, flickering onto each pane of glass as I walked by. It was an image of the President in his signature cool-gray t-shirt, hands on his hips and smiling doe-eyed. “Hi—” The video scrubbed for a moment while it tried to put a name to my face. “Government-issued ID cards are phasing out by the fall of 2022. Have you linked your handle yet? It’s simple and easy! Download the Documerica app on your smart device and...” His voice faded as I rounded a corner.

I shoved my hands into my pockets. The cold made me feel less drunk than I was. My mind drifted back to the dance floor... 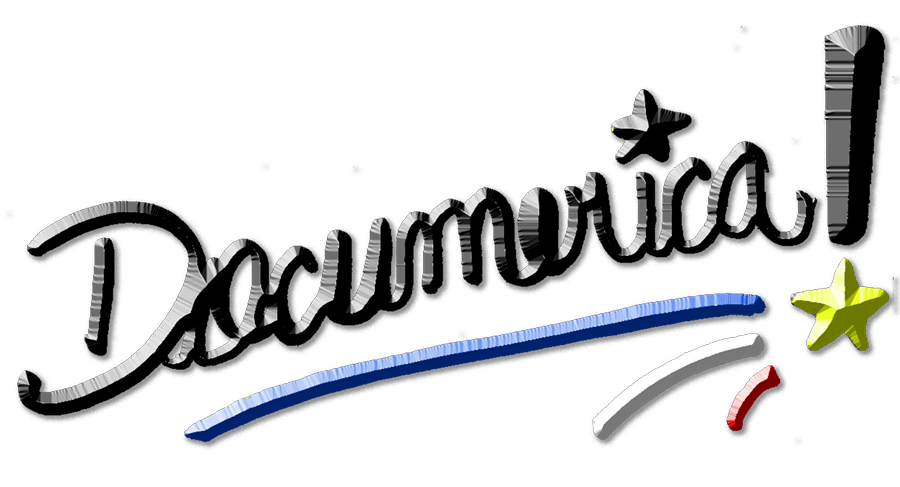 I Dreamed I Was a We: SF+ Reading Sessions 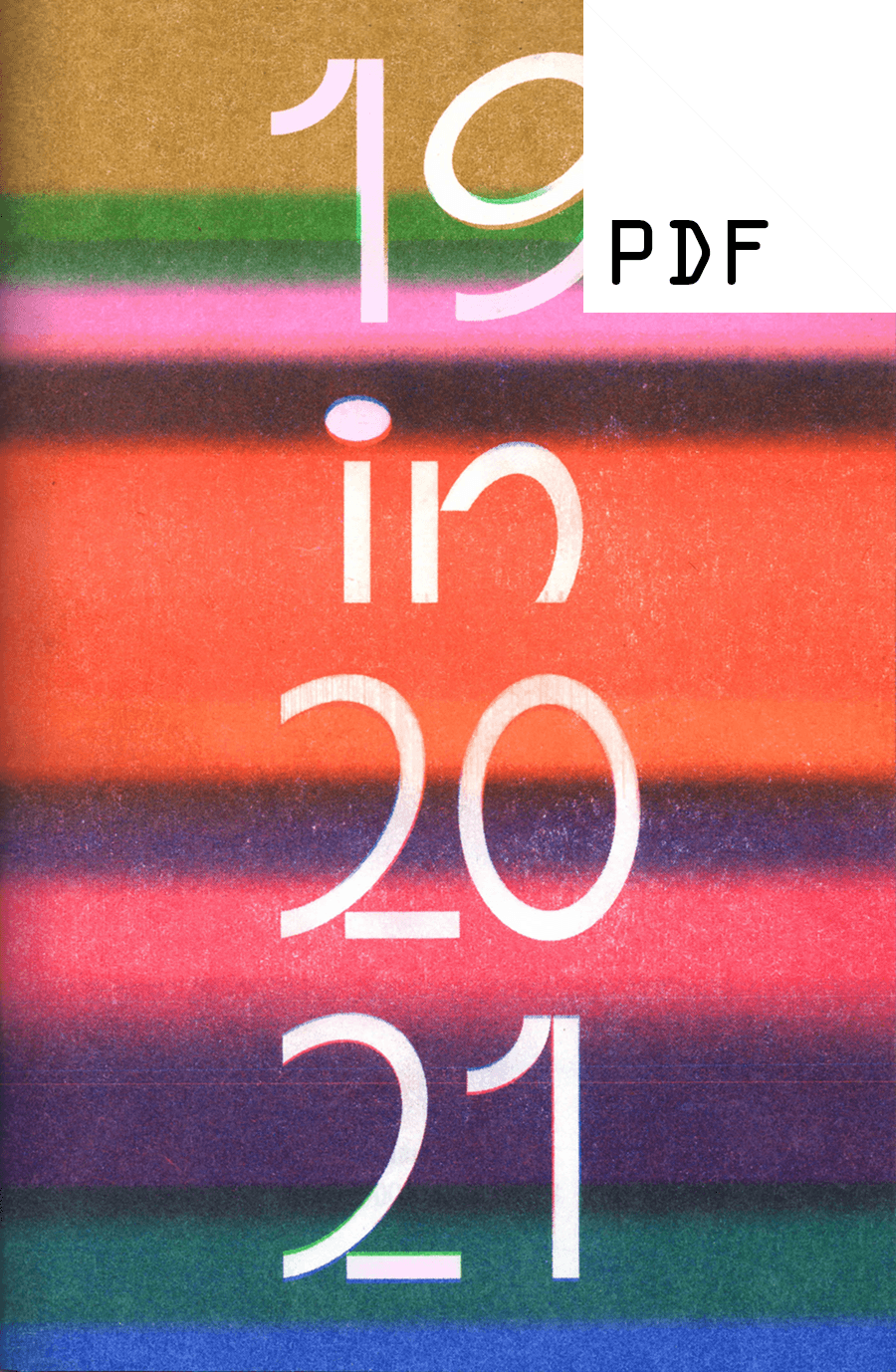 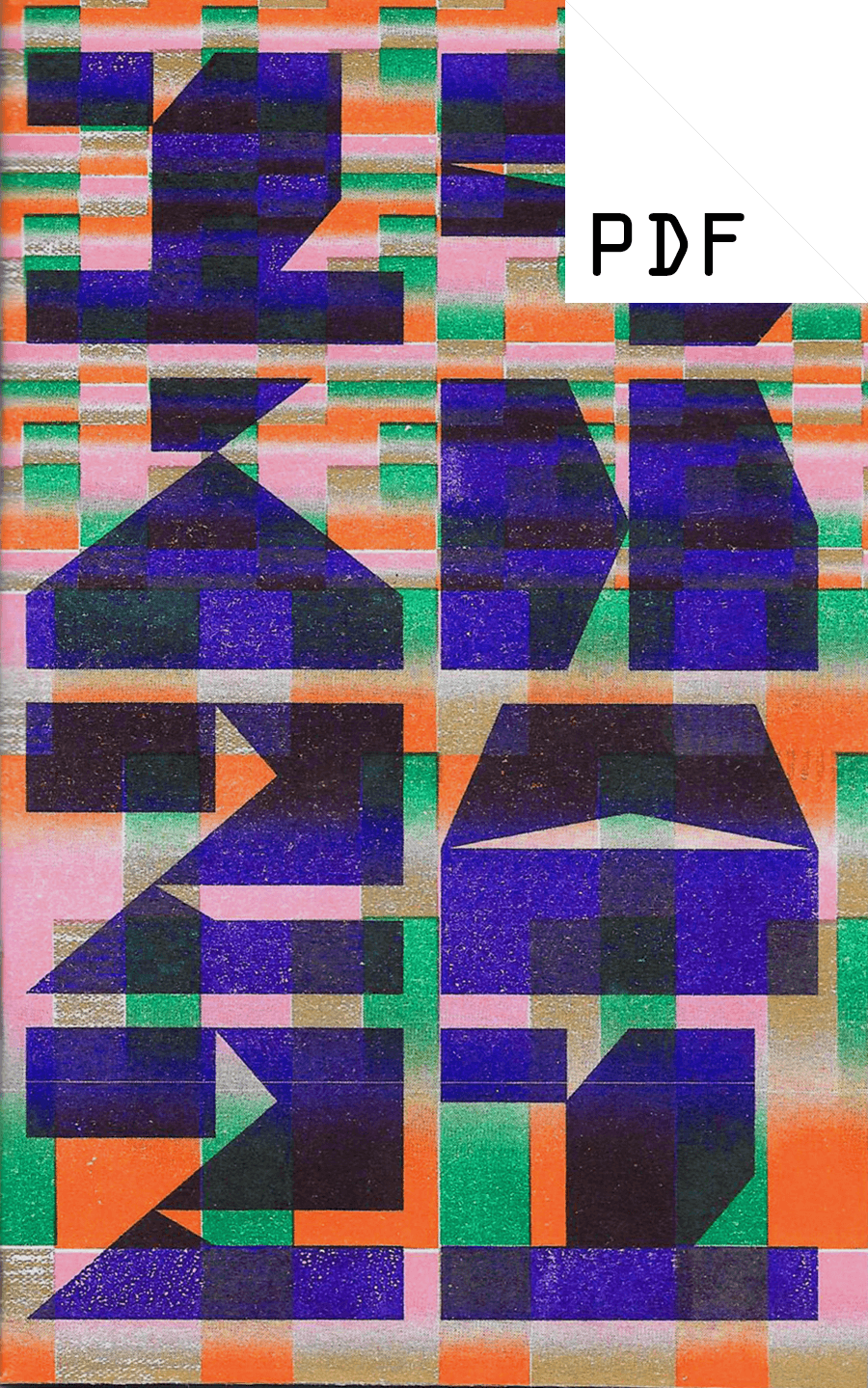 19 in 2021: A Drone’s Eye View is a website adaptation of Nat Pyper’s sci-fi serial of the same name and an online exhibition featuring new works by Bárbara Baron, Julio Córdova, and Marissa Macias. The artists in this exhibition explore the world and themes depicted in 19 in 2021 through moving images, soundscapes, and fashion. This project was selected through the SCP+C 2020 open call program funded by the 2019 Propeller Fund Grant and is hosted by Chuquimarca Projects.

19 in 2021 is an ongoing nonlinear sci-fi serial written by Nat Pyper and published by Martian Press. The serial follows four queer Latinx 19-year-olds as they navigate teenage angst, family ties, and surveillance capitalism.

The characters—Raf, Wev, Sid, and Gen—find themselves between here and there, what Gloria E. Anzaldúa describes as nepantla: a “perspective from the cracks.” Each are descendants of immigrants several generations removed with strained access to the cultures and languages of their lineages. They are between roots and relations, adolescence and adulthood, single and collective subjectivities, mother tongues and future slang, across the spectrum of gender and sexuality.

Complicating matters, they’ve all sworn off social media, invisible to their peers and illegible to the state as the government begins mandating identification through online “handles.” The characters split their time between jobs impacted by automation, bicycling to a field on the edge of town to smoke and talk shit, and listening to discs at a defunct library downtown. They find love and lose it and are haunted by the specter of whiteness, in one case embodied by the ghost of an ex-lover. As the serial progresses, they attempt to rewrite their own story and the world along with it...

Nat Pyper is an alphabet artist working in video, performance, and publishing. In their work and writing, they use language as a sieve and they push the body through it. In addition to their studio practice, they also write sci-fi and research queer anarcho-punk zines of the late 80s and early 90s.

Bárbara Baron is a Brazilian interdisciplinary artist based in Chicago, IL. Her works often utilize obsolete media and explore themes such as memory, time and identity. By experimenting with abstractions of time and space existing within video, the artist creates amorphous narratives through registered memories – either collective or her own – with the intent of preserving herself: 'becoming archive' without limits.

Julio Córdova is an artist and DJ. He DJs at venues including Berlin and Smart Bar Chicago. He also organized the Milwaukee-based club night Earth Angel and co-organizes the reggaeton night Agua de Rosas.

Marissa Macias is an artist and fashion designer based in Chicago. Her garments can be described as sentimental ready-to-wear. Through one-of-a-kind Micro collections, her pieces aim to become tokens of magical empowerment to the wearer. Currently she is working on growing her brand M-037.

19 in 2021: A Drone’s-Eye View is a website adaption of Nat Pyper’s sci-fi serial of the same name and an online exhibition featuring new works by Bárbara Baron, Julio Córdova, and Marissa Macias. This exhibition is hosted by Chuquimarca Projects, a library project space focused on the Native, Mexican, Caribbean, and Central and South American contemporary art and culture discourse in Chicago.